The inclination when you shoot a sports event is to grab a lens with some length and zoom in on the action.  A perfectly good strategy.  Fill the frame with a telephoto.  For football, soccer, and  baseball, 400-600mm; for basketball and volleyball, 70-200mm.   Each of these lenses has the capacity to yield great shots.  But, is that the only strategy for sports shots?  Negative.  What about the other end of the lens spectrum – wide angle?  Is there a place for a wide angle lens in sports photography?  Absolutely.

Wide angle is typically anything less than 50mm.  For sports, a little cheating is fine so I would redefine wide angle as anything less than 70mm.  The typical lenses:  24-70mm; 14-24mm; and a fisheye – usually 15mm or 16mm and funky as all get out.

In landscape photography, wide angle is a go-to tool to exaggerate depth and relative size.  Not only is it used to capture all of a subject – the lens version of taking a step way back – but it is also used to get close to the subject and take advantage of the sweeping wide angle of view.  Here is an example of “getting close” with a wide angle lens in landscape photography, and this can get you thinking about how you might use the same technique in a sports shot. 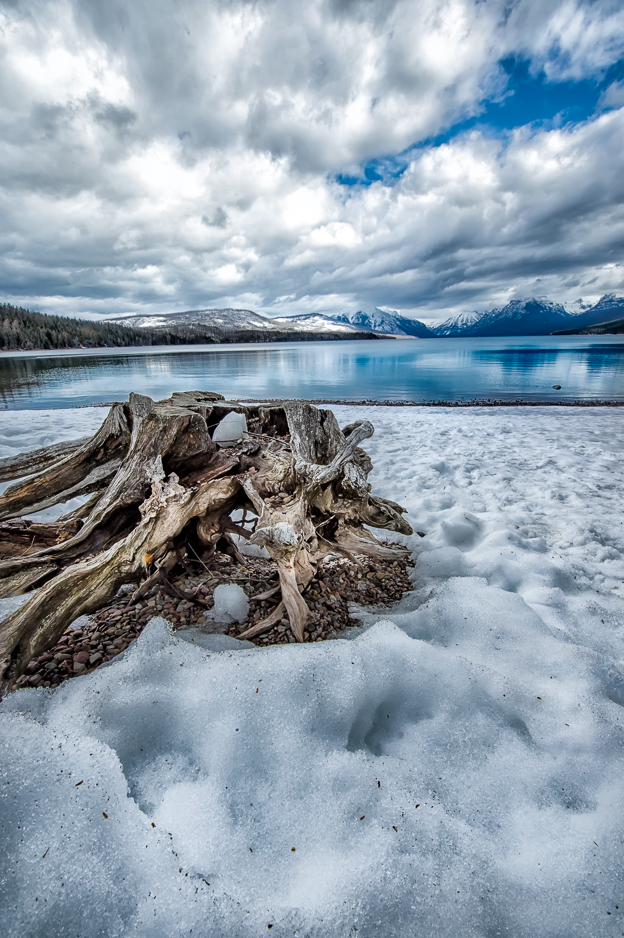 When should you consider a wide angle in your sports shots?  Consider it often; the images created by a wide angle lens are . . . well . . . different.  They give a refreshing and creative perspective of the game and the action. 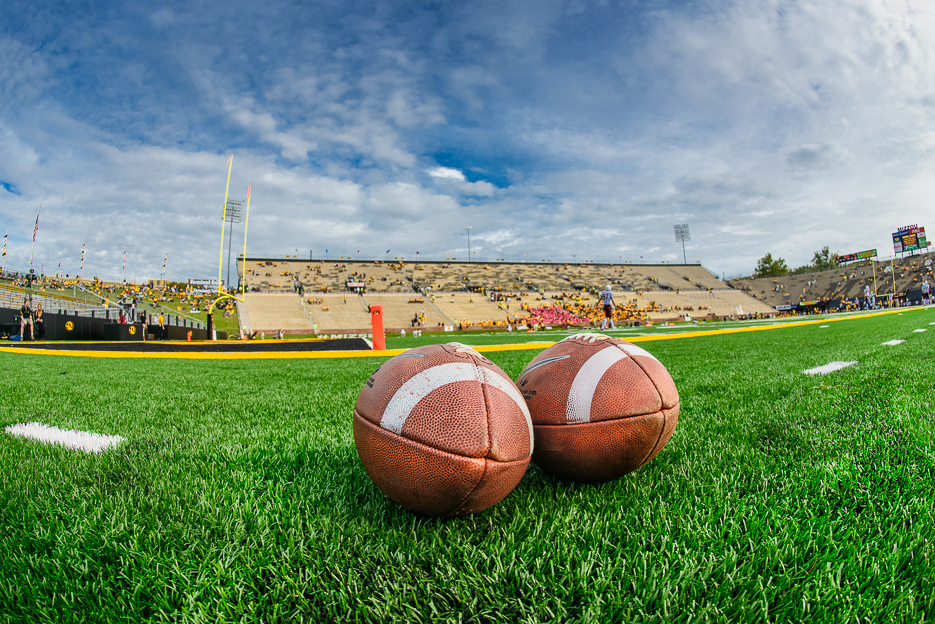 But what about action?  The wide angle lens in a sports action shot can give a real sense of presence – such as how high the skater is above the half pipe: 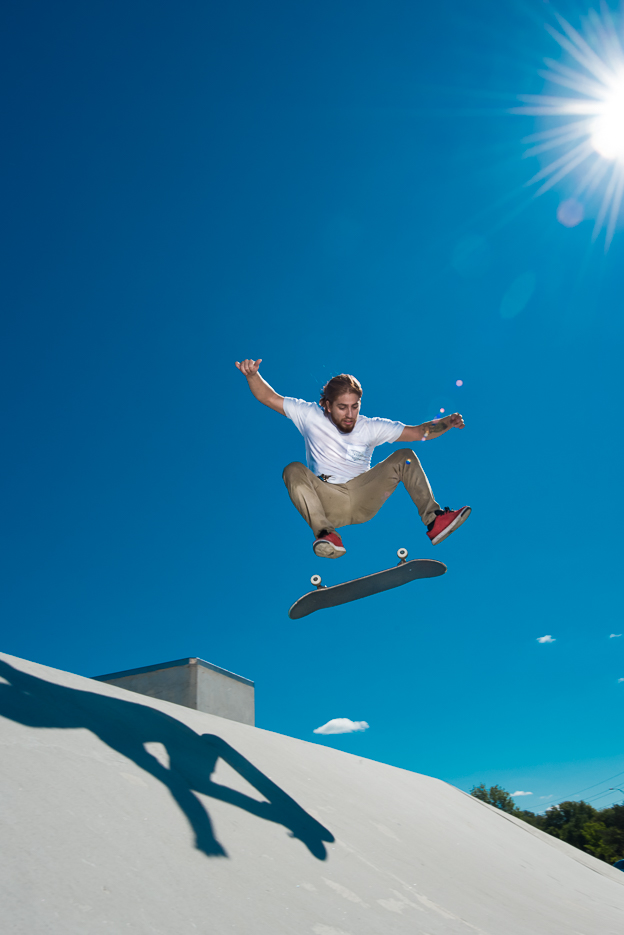 Or a freestyle skier against a milky Montana sky (multiple images brought together in a series of layers with a little Photoshop magic in post): 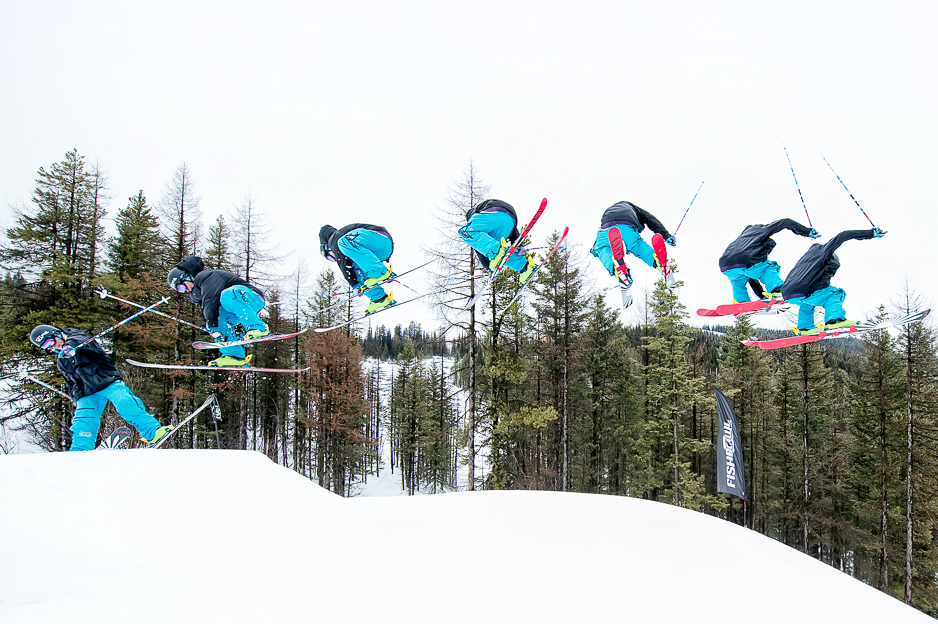 Or to depict how big the arena is as the player, all alone at the foul line, fights off his nerves to stroke a free throw: 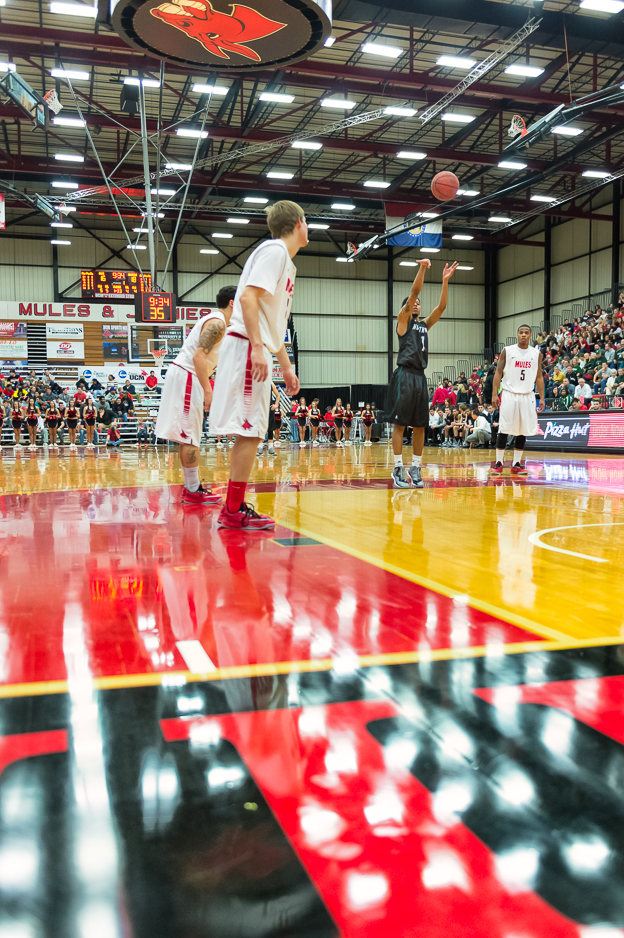 Or scoot closer and give a sense that the athlete is really leaping up towards the arena rafters: 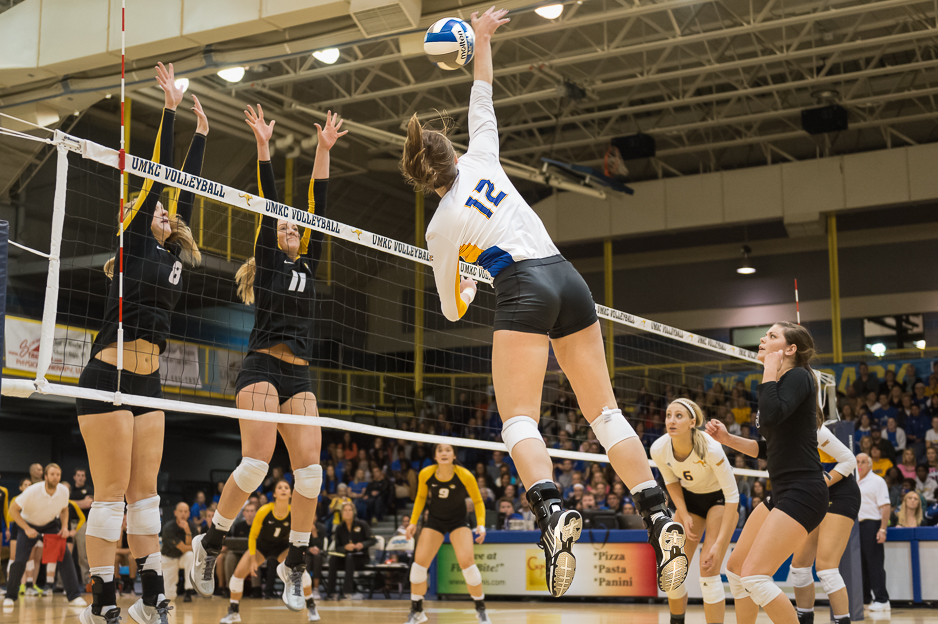 Or capture that Jalen Rose moment in a mid major Division one game: 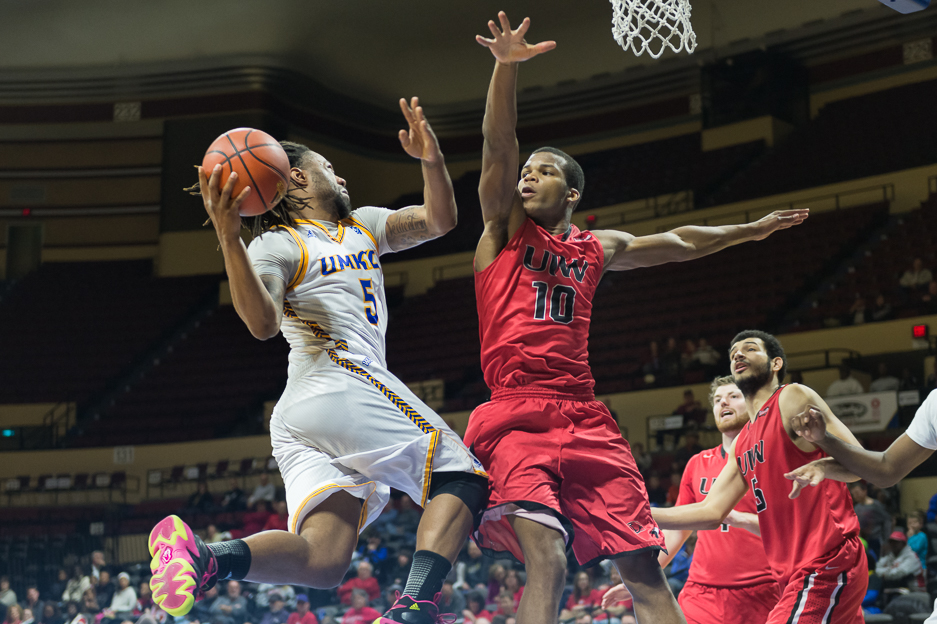 Or even capture a behind-the-action perspective to give a sense of how far away the hoop is from the corner, a shot that would not be available with a more robust telephoto lens: 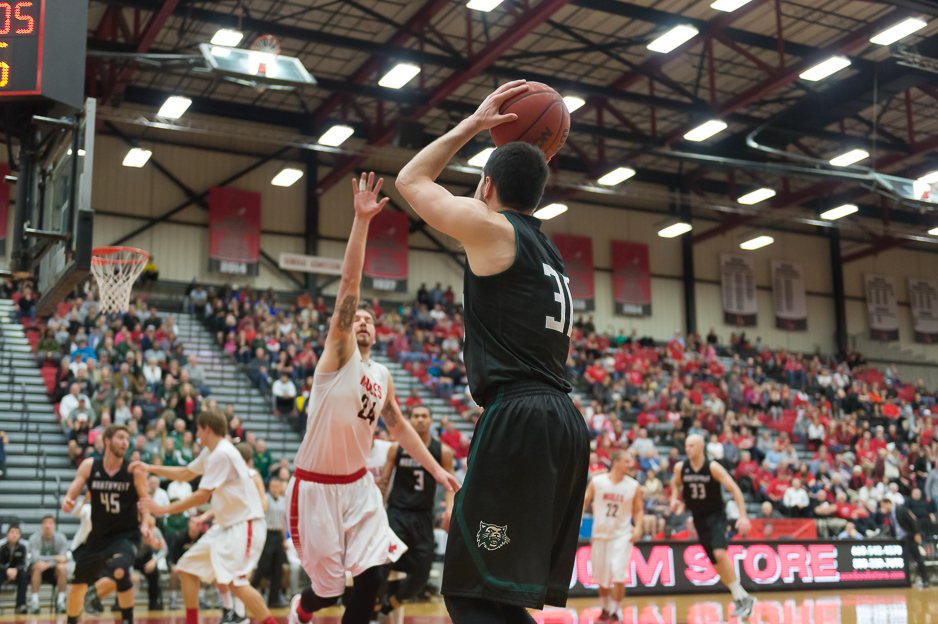 And how about ultra wide with a fisheye? Is there a place for the artsy, curvy distortion of a fisheye in sports photography?  Why not?  Track shots are surprisingly conducive to a fisheye, which imparts a curve to the hurdle race or accentuates the long distance runner as he leans into a curve on the track. 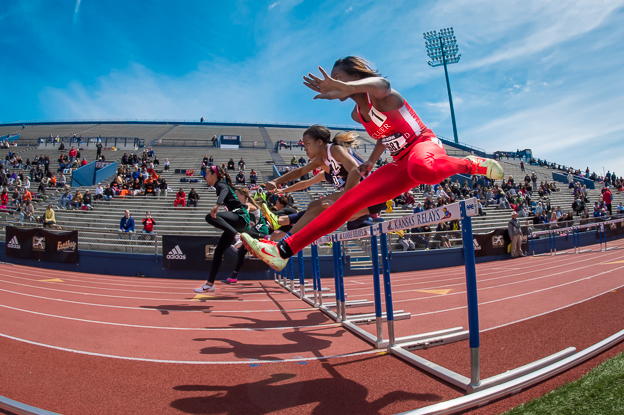 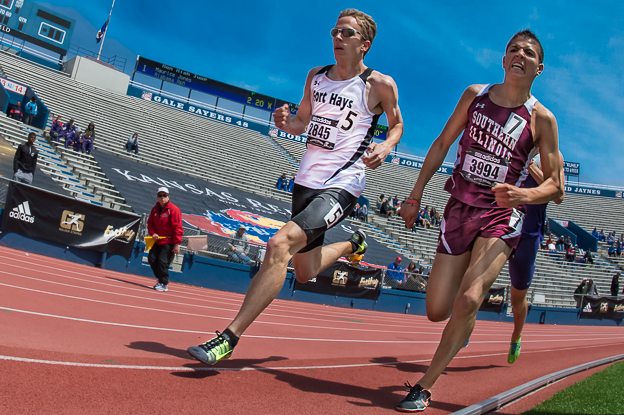 Or go really funky and capture an entire volleyball sequence: 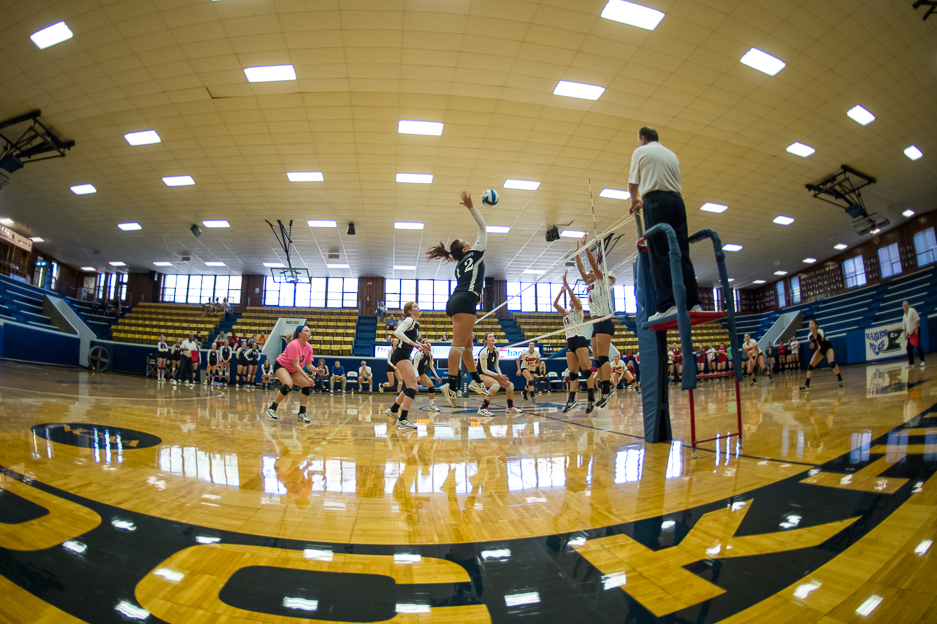 Someone once asked Dave Black what lens he prefers to use at a basketball game and he said his 24-70mm lens.  At first blush, it may seem impossible to get a shot in which the athlete is anything other than dots in a large arena shot.  But, after you play around with the wide end of the spectrum, it grows on you as you discover a different way to look at sports through a wide angle lens.

Next month, do :: or :: diso flies the friendly skies as it explores the world of sports from above. 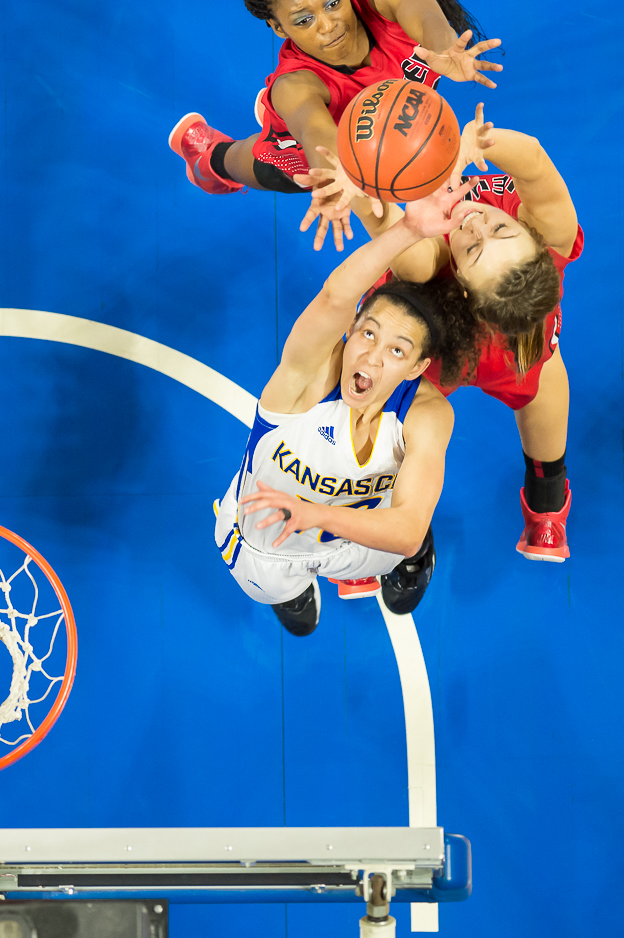