This Issue No. 5 of do :: or :: diso covers two summer sports that are a bit “out there” — Rugby and Roller Derby. Both are fun and exciting for spectators and offer opportunities for photographers to work on some skills and maybe add a little art to the science. Matches are easy to find on the internet and unlike other sports, access to shoot is liberally granted… often for just a share of your images with the teams.

In other parts of the world, Rugby rules. According to the International Rugby Board, there are now at least 5.5 million men, women and children playing the sport in a significant number of countries worldwide — such as Mexico, Jamaica, New Zealand, Hong Kong, Spain, Germany, Moldova, Zimbabwe, China, Russia, Brazil, Great Britain, and the USA. The Olympic games have not featured Rugby since the 1924 summer games. 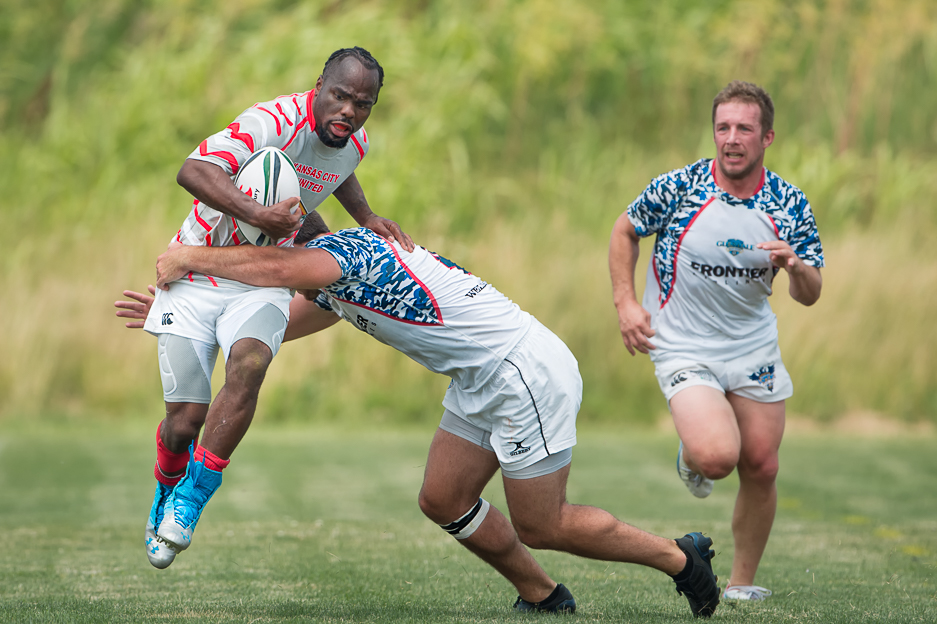 But, the seven-a-side version (called “7s”) will be played in the 2016 Olympic games in Rio de Janeiro. Not only does 7s have fewer players (traditional Rugby uses 15 players per side) but it also features shorter matches. Here in the states, 7s tournaments are summertime events (sometimes called festivals) and are known for having more of a relaxed atmosphere than 15-a-side games.

Several photography challenges are presented in shooting summertime rugby. The field is large so it is hard to cover all the action from one end zone or the other, even with a 500mm lens. There are lots of chances for shots — the sport is most certainly rough and tumble. 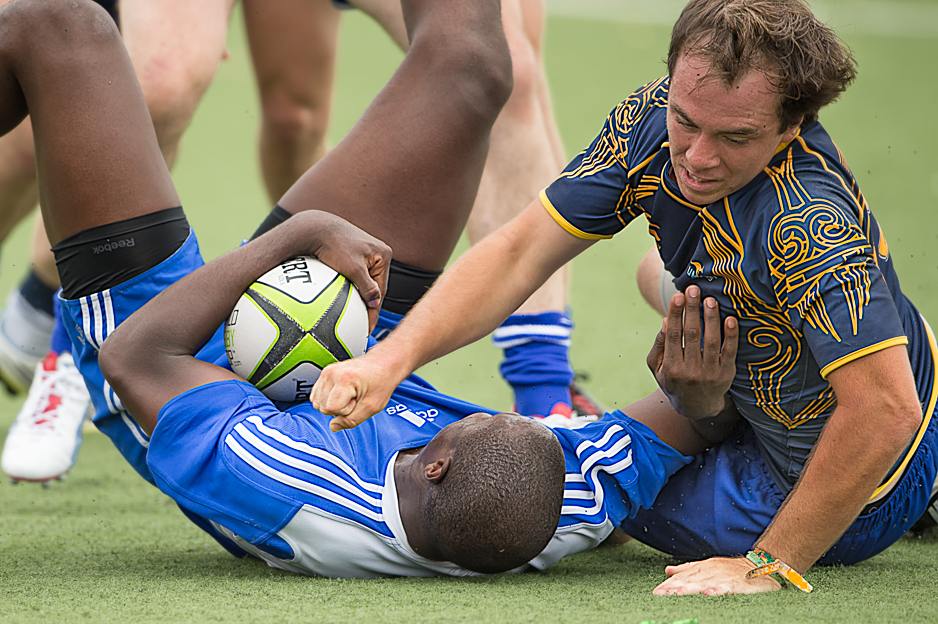 The 500mm lens is great to cover half the field, is very fast and the focus is sharp and precise. That lens, however, is too big when the action gets close so it helps to carry a second body with a 70-200mm lens (either the f / 4 or the 2.8 should work well). The 70-200mm is also good to roam the sidelines and shoot across the width of the field into the action rather than navigate length of field shots. 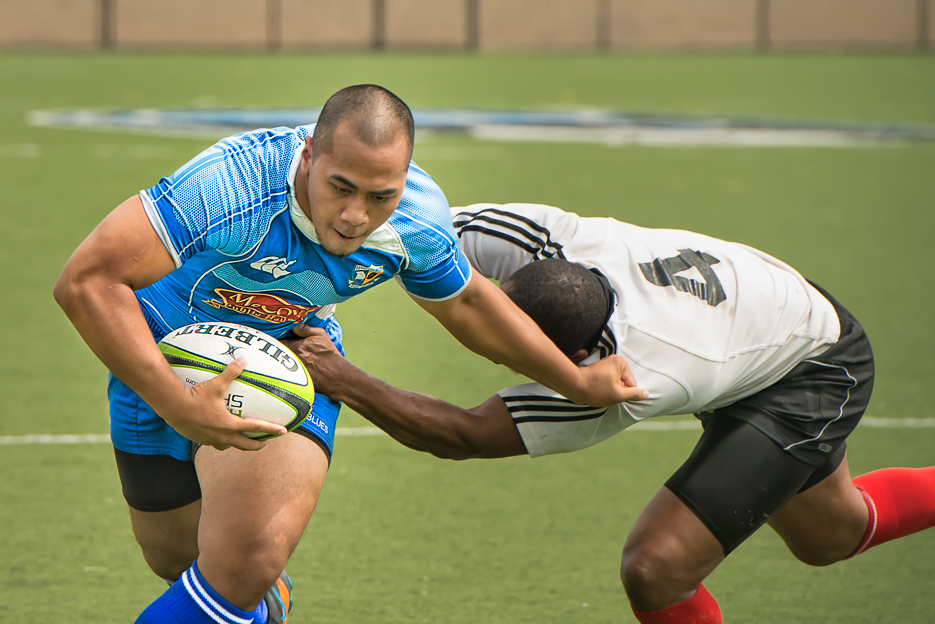 Because the matches are during the day, there should also be enough light to experiment with a teleconverter to increase length and coverage.

Get Close and Fill the Frame

The Rugby action is sufficiently fast that it warrants shutter speeds of at least 1/500th second or higher; the afternoon glare can be substantial so care should be taken to shoot with the sun behind. Because it is a day game in the states, you can shoot at ISO 400 to 800 and noise is therefore not an issue. It is spirited so fill the frame, get close, and find the emotion . . . in the eyes. 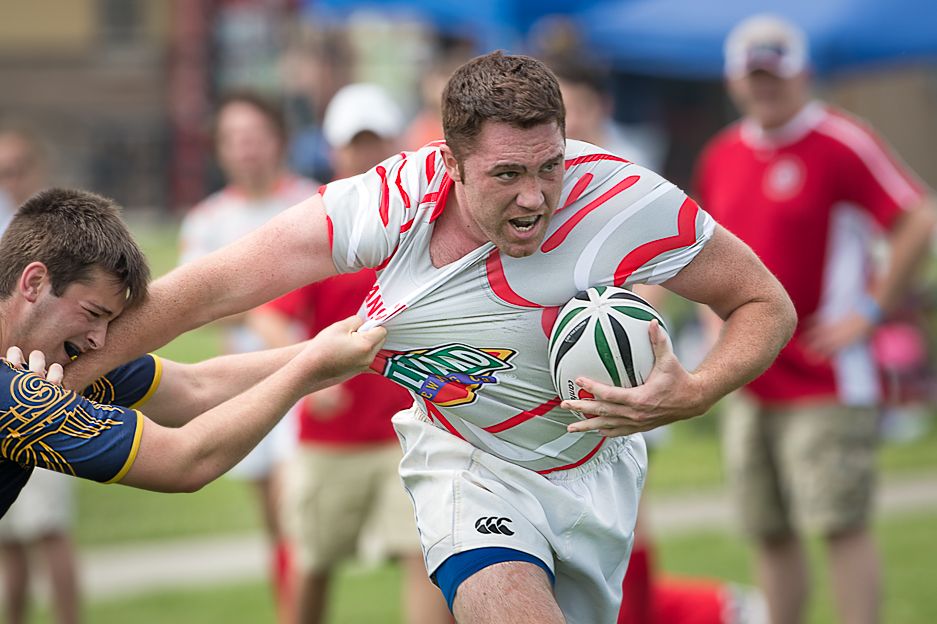 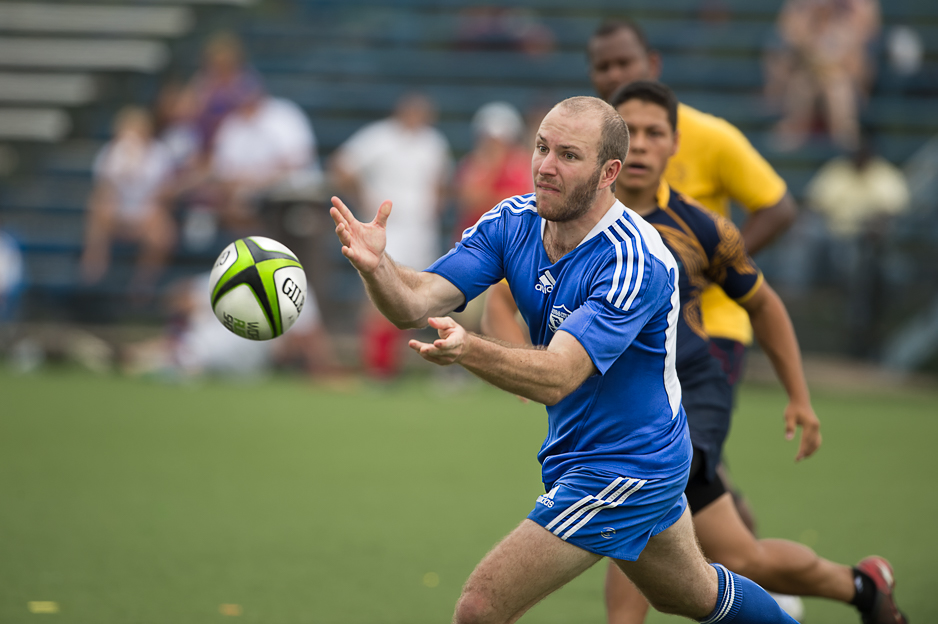 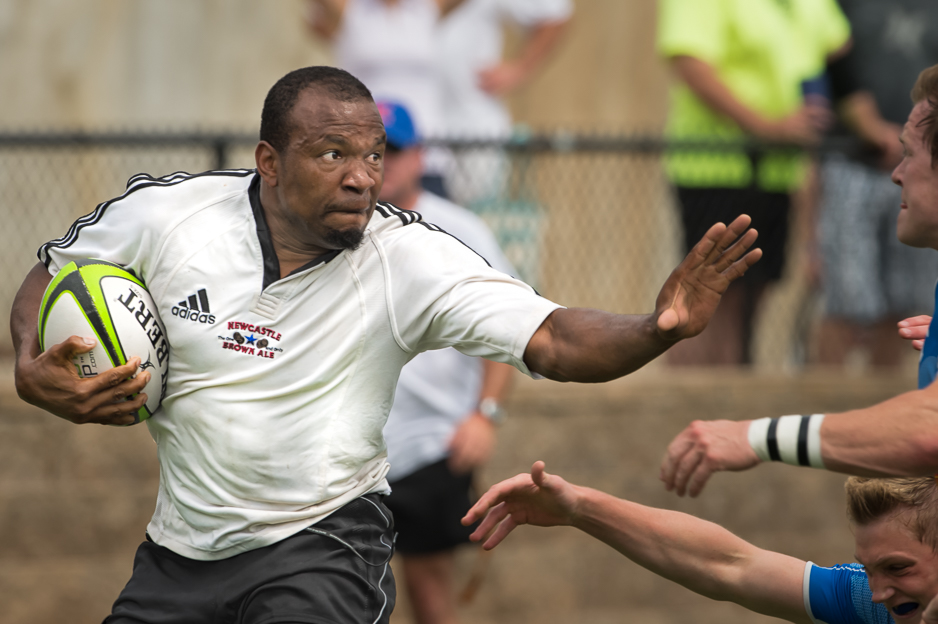 Roller Derby — part sport, part carnival. As a kid I watched roller derby with my Dad on Sunday morning television. The jammers scored points by skating past opposing skaters at breakneck speed before cutting off the jam — 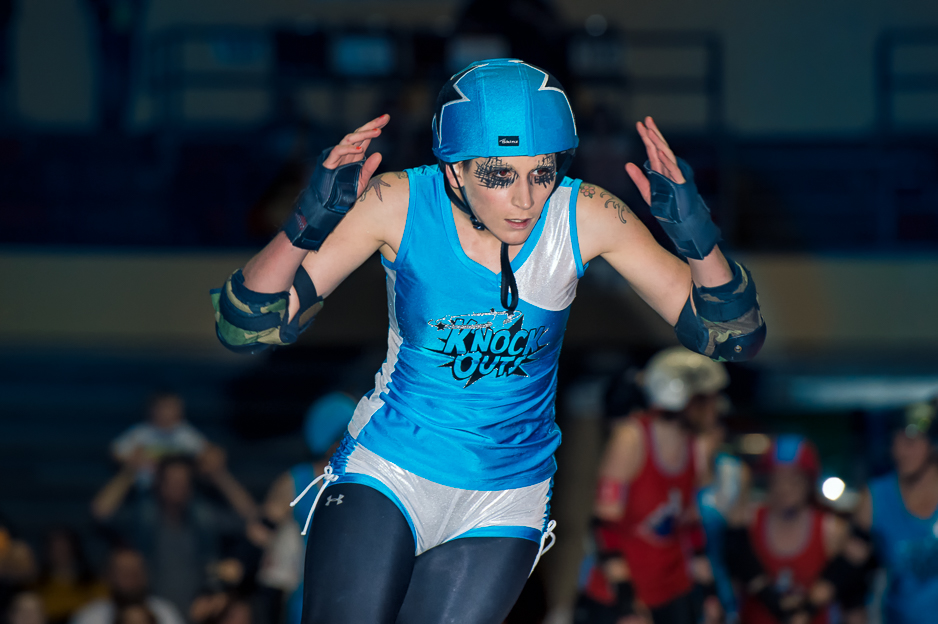 while their teammates elbowed and blocked the opposition to clear a path. 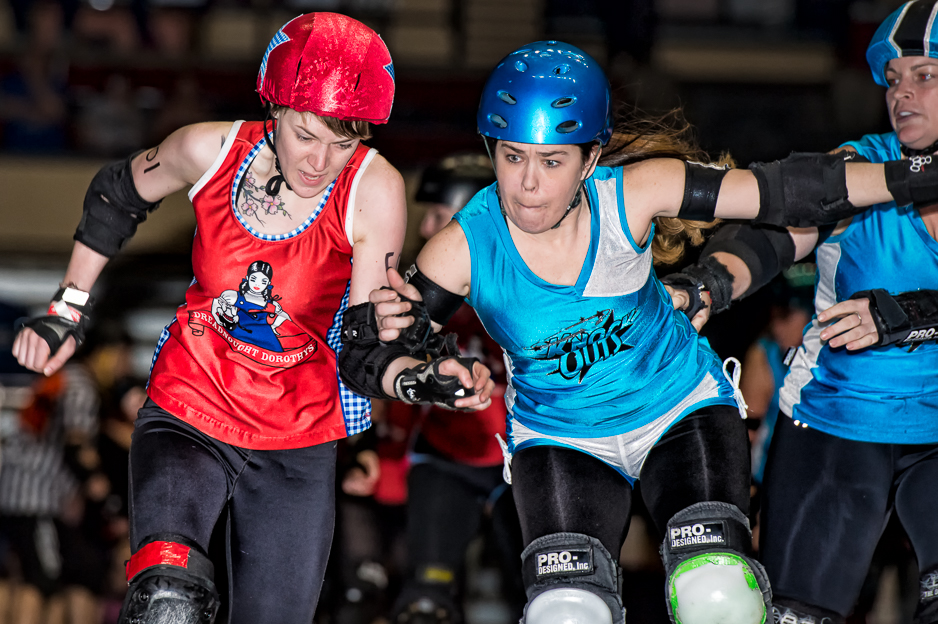 The San Francisco Bay City Bombers had 5’ 10” Joanie Weston, “number 38 in your program, No. 1 in your hearts”, as the announcer would say. Joanie Weston died of a rare disease in 1997 and some attribute the sport’s resurgence to the media attention given to her death. These days, leagues have sprung up in many cities throughout the country, including here in Kansas City. The skating is real and fights are almost nonexistent. The colors are vibrant, the fans are a hoot and the flat track teams and leagues seem quite willing to permit photographers in and close to shoot. And, they let you use speedlights!!

The arena is dim and if you choose not to use speedlights, a high ISO is a necessity. The arena lights are older and often put out a weird color cast, so white balance is tricky. I set a custom white balance to get the light temperature correct. To do so, I use a Lastolite EzyBalance Calibration card, but most any camera gray card will suffice. 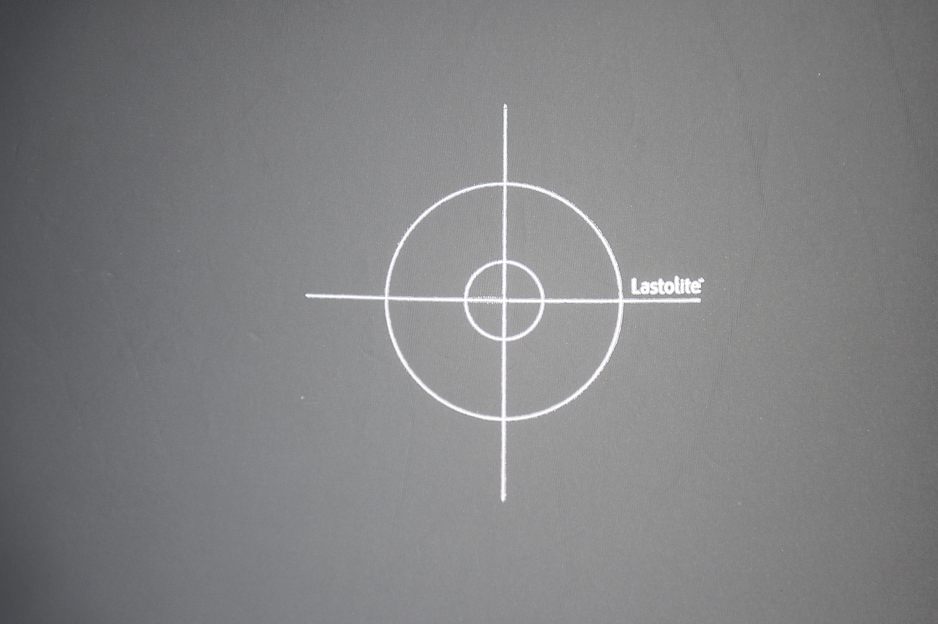 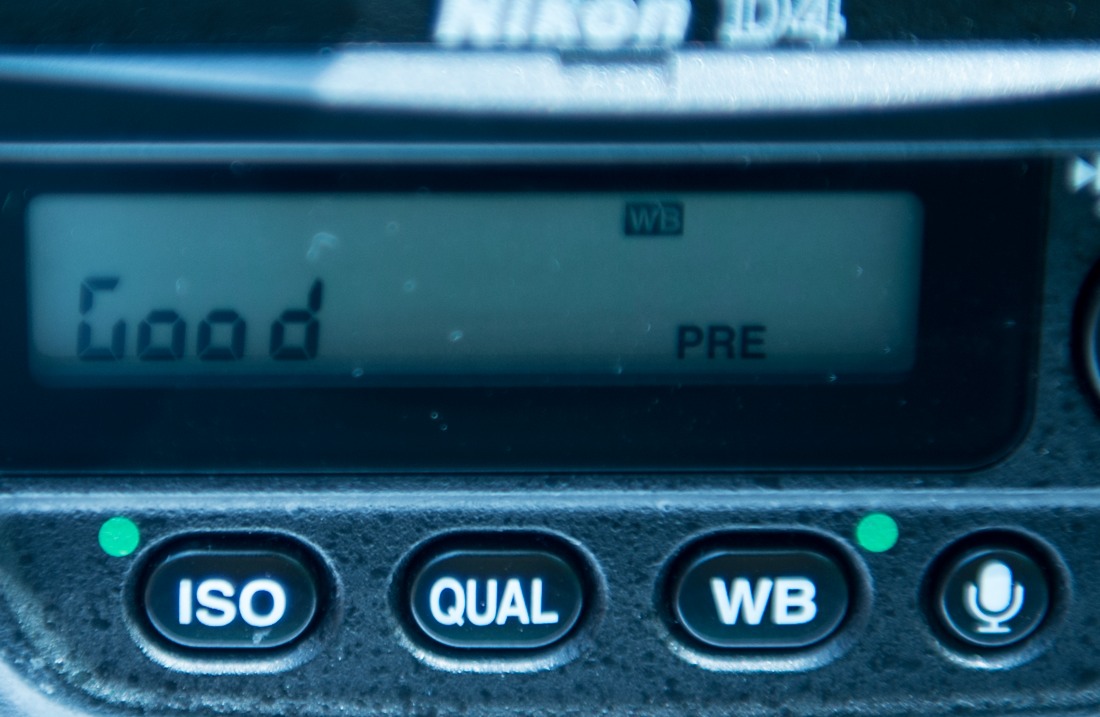 Once you have the custom white balance, the necessary adjustments to compensate for the color temperature of the arena are locked in and you can shoot the matches without worrying about white balance.

Roller Derby is a good subject to use to discuss the depiction of movement and speed in an image. The Derby skaters whizz by so the natural inclination might be to shoot at a high shutter speed: 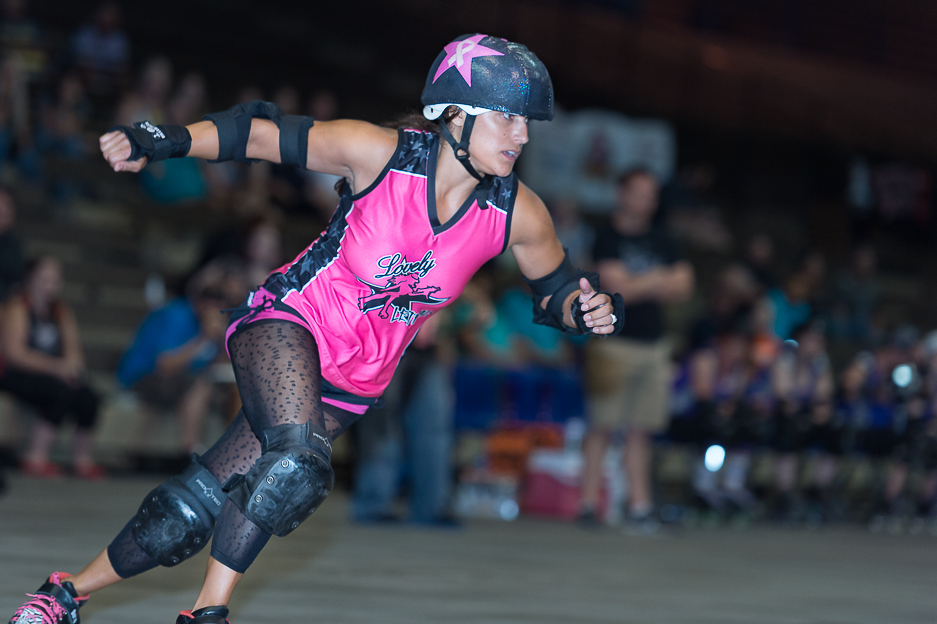 This will freeze the action and using some of the do :: or :: diso techniques from prior issues along with the speedlight, the subject is separated from the background. Placing the subject a little to left of center when she is skating to the right gives the impression she is moving across the image to the right, as she was. But, she is frozen as well as the background. As an alternative to the freeze, here is another way to think about the depiction of speed – pan with a speedlight: 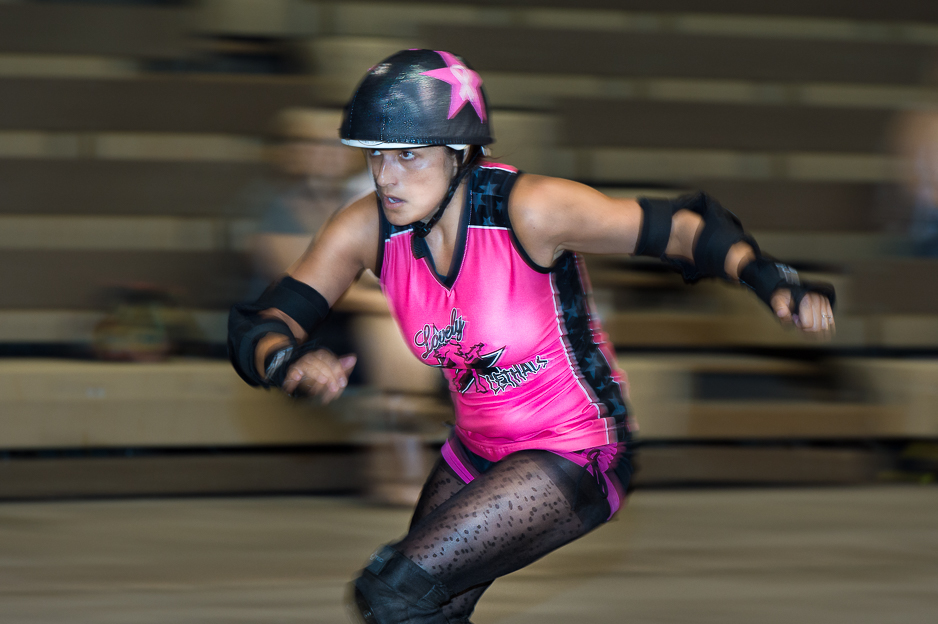 To pan, set the shutter speed very slow, here 1/50th second. Stop down to a smaller aperture to increase the depth of field and have as much of the subject in focus as you can. Focus on the skater’s jersey, and maintaining the focus point, pivot at the waist twisting to the left as the skater moves to the left. In the pivot, keep the same plane for the camera and try to keep the camera focus point on the same spot on her jersey through the entire pivot. Squeeze the shutter and follow through with the pivot. When it works, the skater is in focus and the background is blurred caused by the camera movement and the much slower shutter speed. The background blur creates a feeling of movement – here streaks of out of focus horizontal bleachers.

It works on anything that moves – a cyclist; a car or motorcycle; a skateboarder; a runner. The use of flash also helps to freeze the skater. According to Nikon, the duration of the flash of an SB900 is 1/880 second so the quick burst of light serves to help freeze the image of the skater without diminishing the effect of the panned background blur.

Find a Roller Derby venue, get permission to shoot the matches, and spend a night shooting Roller Derby. Capture the craziness of the sport – it will definitely be an edgy evening. 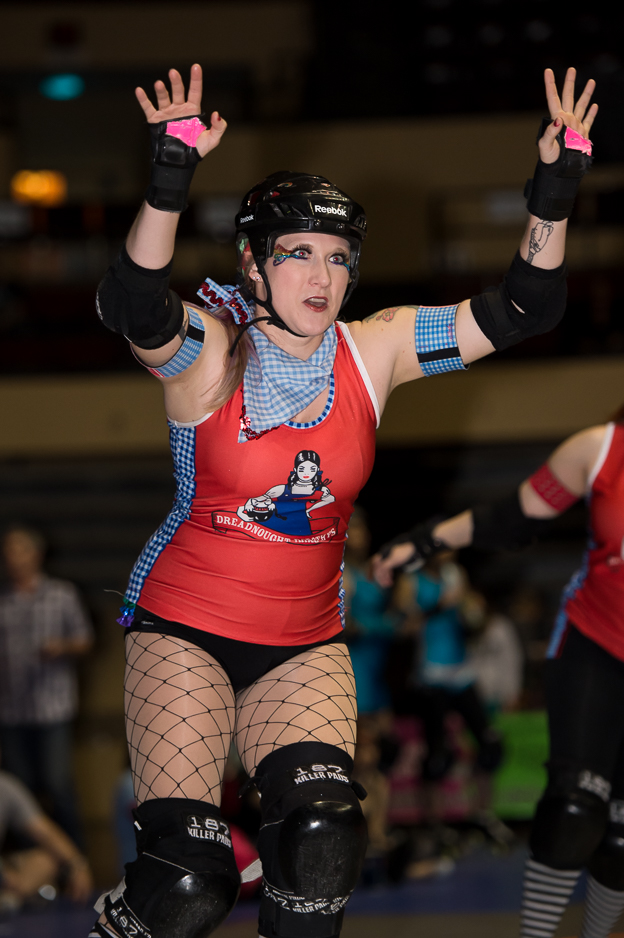 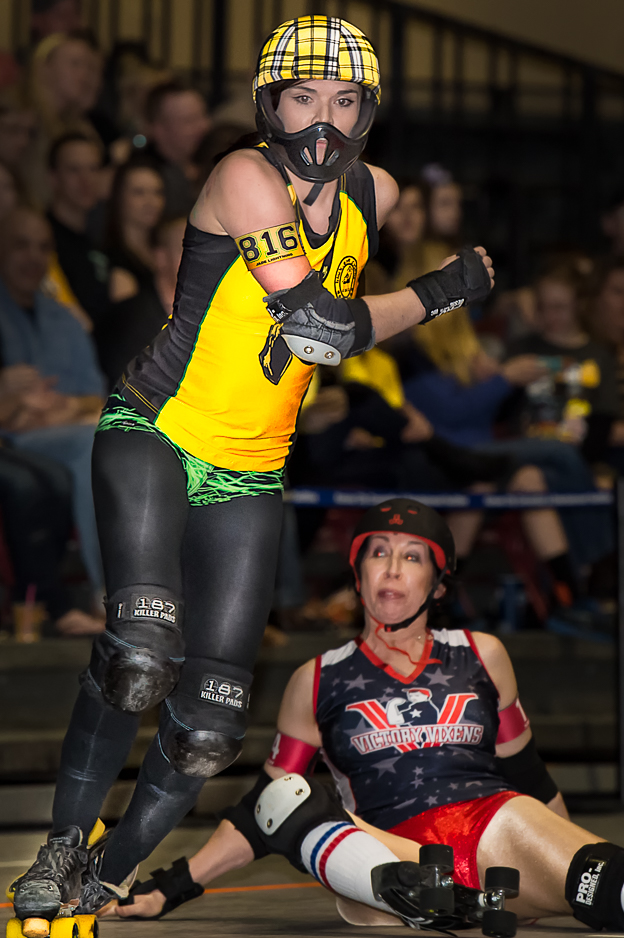 We talk PocketWizard Flex TT5 technology at do :: or :: diso. 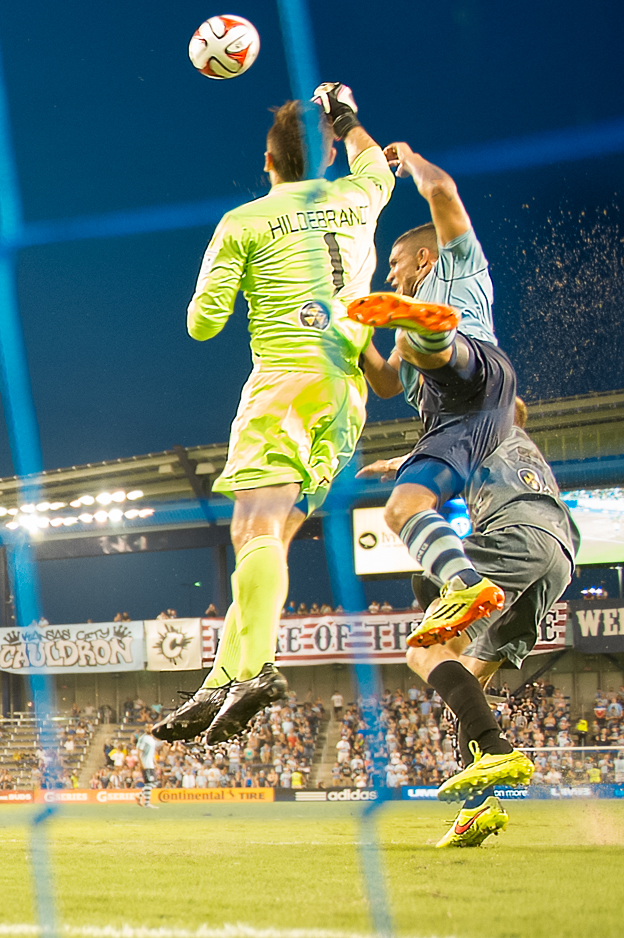